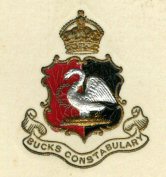 Out of a total of 78 Police Officers, 30 were recalled to the Army having previously served in the military, six were released by the Home Office and the remainder volunteered. Three were injured so they were unable to return to police duty after the war and 15 were killed in action.

The Memorial Display is to remember the 15 police Killed in Action during their service in the armed services during WW1.

The display will be at the Central Milton Keynes Police Station, Witan Gate, from the 30th June until the beginning of September. The display will then move to the MK Central Library to form part of the MK Heritage Open Days programme of events

The 2014 Great War commemorations have uncovered a gap in the Society's records about the village during this period. The project Serving King and Country 1913-1920 has been designed to redress this and as part of the national celebration we aim to engage with the local community as much as possible including both village schools.

Research will uncover life on the home front, those that served, those in reserved occupations - working on the land and at the famous E & H Roberts Iron Foundry. It will enhance the archive, preserving the heritage of the village, that's now vitally important due to the extensive re-development, doubling its size, which has taken place over the last 13 years. Donated/loaned material will be digitally recorded, scanned and stored electronically into the DVHS collections. Any donated original material will be stored in the existing Society archive, or if of a 'unique' or 'valuable' nature with a local museum/archive.

Yvonne Bell, an artist and village resident, will work with pupils from Deanshanger Primary School to produce a silk-painted triptych and a project A Postcard from the Front that the whole school will participate in and which will be displayed at the school and in other exhibitions.

Collecting events will be held through the project which with research will form the content of an exhibition event for villagers held in the Deanshanger Memorial Hall Community Centre and will also be made available to the Discover Milton Keynes Heritage showcase programme.

A dedicated First World War web site page will be incorporated into the existing DVHS site which is currently being upgraded and the pages will form part of the new look.

Our project aims to track all the soldiers from North Crawley who served in the Great War and to provide something descriptive and meaningful a bout each and every one of them. We aim to uncover the jobs they did, their families, where they lived and the impact it had on village life when the soldiers were away or did not return. A list of all the soldiers is already available, together with a list of those who did not return and where they are buried. We already know how many soldiers served and the percentage who did not return. An advert will be placed in the local village magazine (SCAN) to ask if anyone in the village has any memories that have been passed down from family members, photos, documents, medals and any other memorabilia.

The research will be used to produce a book and/or CD. We will also arrange an exhibition (part of the Heritage Weekend events in September 2014). A board will be prepared for each soldier (or family if more than one soldier in a family served) containing as much information on each as possible.

We aim to involve the children from the village school to make sure they have an awareness of WW1.

We have started to research the eleven men from Simpson who died in the Great War: who they were; where they lived; their lives in this area before they enlisted; when and how they died; where they are buried; what decorations they received etc. In addition, we plan to research some of the 77 who served and returned to live in Simpson. This research will continue, using resources on the internet, local libraries and other sources of information, at little or no cost.

The intention is to publish the products of this research in the autumn of 2014 in a booklet. The booklet would be distributed, free, to every household in the parish of Simpson and Ashland as a 'souvenir' (an estimated 750 copies); additional copies could be sold in aid of History Group funds and/or a suitable charity e.g. Royal British Legion.

The launch of the book will be accompanied by an illustrated talk in Simpson Village Hall. We are also considering other outlets for use in the community and more widely in Milton Keynes e.g. a poster such as those previously created for Discover Milton Keynes, and a roll-up banner.